The USIHC National Ranking is a system to compare results of riders of pure-bred Icelandic horses at selected USIHC Sanctioned events all over the US with each other.

The USIHC Sport Committee started the National Ranking in this form in 2007. It is a continuous system. After each sanctioned show is closed and approved by the Sport Leader, its scores are incorporated into the Ranking. The current ranking standings are shown below.

What competitions are included in the National Ranking?

Any sanctioned competition held in the United States contributes to the National Ranking. Show organizers receive a sanction for their competition by applying to the Sport Leader who grants the sanction, after confirming the details of the application.

What classes/tests are included in the National Ranking?

How is a rider's position in the ranking computed?

The position of a rider in any discipline in the National Ranking is based upon the arithmetic mean of the two best preliminary round results with any horse from the past two years.

What if I ride in more than one tölt or gait test at the same event?

If you choose to ride in more than one ranked test in the same group (tölt, four gait, or five gait) at the same event your score from the most advanced test will be used. For example, if you ride in both F1 and F2 your F1 score will be considered for the ranking.

What if the show I'm competing in does not offer preliminaries and finals?

If a given sanctioned show only only offers one round (not preliminary and final rounds) for a given class/test, the results from that one round will be used to calculate the National Ranking contribution of the show.

When are rankings updated?

The Ranking is updated as soon as the results of a contributing show are reviewed and approved by the Sport Leader, who is also the Chair of the Sport Committee.

Are there National Ranking awards?

A High Point Award will be given each year to the rider with the highest average in each discipline as of December 31. The awards will be presented each year at the USIHC Annual Meeting.

A small "Iceberg" award will be given to each winner also so that they may keep something permanently. 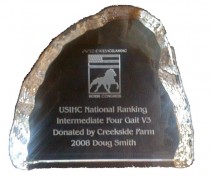 What are the past end-of-year National Ranking results?

The detailed National Ranking results since the program's inception are available below: